What is the Van Gogh Museum?

It's a museum dedicated to Vincent Van Gogh, the greatest 19th century Dutch painter. He was unbelievably productive - he produced about 2000 pieces in 10 years or so before he shot himself aged 37.

It's perfectly sized over three floors, so you can do a quick tour of the highlights or stay in there all day. Sunflowers, Irises, The Bedroom, The Potato Eaters...they're all in there and you can see how his work evolved over the years until he painted his final pictures of a wheatfield from his room in the asylum. Pete was always really proud of the blue plaque near our house in Isleworth that marked where Van Gogh had lived during his time in the UK. It didn't get mentioned in the museum, which focused on his time in the Netherlands and France, but he'd have loved the place.

Where is the Van Gogh Museum?

I recommend booking online and using the audio tour.

Where was the Van Gogh Museum in the 2015 Lonely Planet Travel List?

Does the Van Gogh Museum deserve its place in the 2020 Lonely Planet Top 500?

Absolutely - it's a great museum about one of the world's most iconic and talented artists. 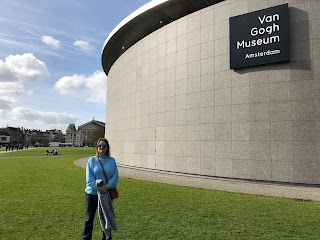