What are the Pyramids of Giza?

There are three major pyramids on the Giza plateau in Greater Cairo. The Great Pyramid, built as a tomb for the pharoah Khufu, was one of the Seven Wonders of the Ancient World and is the only one that still exists today. It was built sometime in 2600 BC and took over 20 years to complete. It contains an estimated 2.3 million blocks and stands 139 metres tall. It was originally taller - the original smooth limestone rendering has been removed.
There are two other main pyramids: the Pyramid of Khafre and the Pyramid of Menkaure. There are also smaller subsidiary pyramids dotted nearby containing the tombs of their wives and other important women.

They are stupendous. The Great Pyramid would be a staggering achievement if it was built today, so it is utterly baffling that someone managed to conceive and build such a huge edifice nearly 5000 years ago.

Where are the Pyramids of Giza?

We booked a tour and then flew from London to Cairo, where the tour guide met us. They guided us around for two days - the first day was dedicated to the Pyramids and the museum. On day two, we went to the Citadel in Old Cairo. You could easily visit Cairo/Giza under your own steam but the tour made it all a lot easier.

The Great Sphinx is also part of the Giza pyramid complex and is a must-see. This particular sphinx is believed to feature the face of Khafre, the pharoah buried in the second largest pyramid, on the body of a lion. Nobody knows why its nose was broken off but our guide told us that it is in the Louvre (63), while the sphinx's beard is in the British Museum (56).

Where were the Pyramids of Giza in the 2015 Lonely Planet Ultimate Travel List?

Do the Pyramids of Giza deserve their place in the 2020 Lonely Planet Top 500?

They should be in the top five. They are amazing. 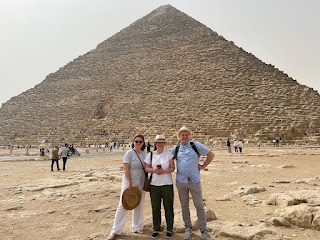 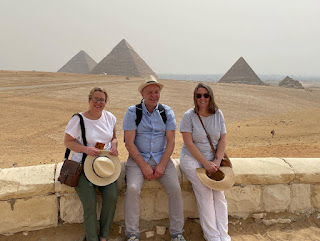 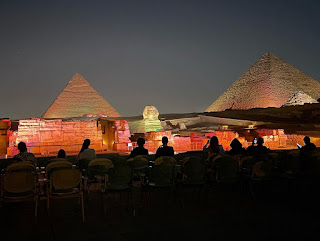