What is St David's Cathedral?

The cathedral that stands today was begun in 1181. However, it is said to be located on the site of a monastery created by St David, patron saint of Wales. who died in 589. The original shrine to St David was lost in the Viking raid of 1089 and a new one was built in 1275. A body was kept in the shrine, believed to be David, but those bones were lost during the Reformation. The shrine has been restored and you can visit it inside the Cathedral today.

It's very impressive. The ruined Bishop's Palace behind it makes it look even bigger than it is.

Where is St David's Cathedral?

St Davids, Wales - interestingly, St Davids is the smallest city in the UK, with fewer than 2000 inhabitants.

How did we get to St David's Cathedral?

I got a train to Carmarthen and then hired a car so I could drive around Pembrokeshire easily. I also walked a bit of the Wales Coast Path (82).

I was surprised it was so high up in the first edition but it deserves a place. 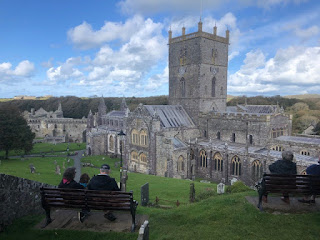