What is it: Santorini is a Greek island. It's special for a number of reasons; it was once a volcano that erupted and collapsed in on itself, so it forms an unusual crescent shape today; there is a theory that Santorini is Atlantis; if you want picture-postcard Greece with blue roofs and white buildings, then Santorini is the place to come.
What's it like: It's stunningly beautiful.
Where: Santorini, Greece
When: September 2008
How: We stayed in Perissa for a week, having booked with a tour operator. We stopped using tour operators the year after and started booking our own flights and hotels.
Worth noting: It's not a huge island and there's a bus that goes between the main towns, so definitely go to Oia and Fira.
Place in the 2015 edition: 18
Did it deserve to lose its place in the top 500: It didn't lose its place exactly - the Cyclades appear at 62 in the list and Santorini is one of the Cyclades along with Mykonos and others. 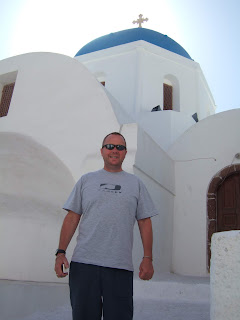