What is the Golden Gate Bridge?

It's an art deco bridge, completed in 1937. It was the longest suspension bridge in the world at that time, stretching 1.6 miles (it's now the 9th longest).

It's very striking, mainly due to its unusual colour. The story goes that the steel for the bridge was coated in a red lead primer and one of the architects, Irving Morrow, saw it one morning and decided that the tone was right for the surroundings and should be used permanently.  They settled on a shade called 'International Orange'. It was called the Golden Gate because that's the name of the strait that connects the Pacific to San Francisco Bay.

Where is the Golden Gate Bridge?

We did a road trip from San Diego up to San Francisco. We also visited Yosemite National Park (20) and Alcatraz (was in the 2015 edition but not 2020). We got to the bridge itself on a 60 minute hop-on/hop-off bus trip that also took in Sausalito.

There were only six bridges in the 2020 edition of the Top 500. Lonely Planet chose the Golden Gate because of its relationship with the weather - it looks incredible on foggy days apparently, which won it a place over the Sydney Harbour Bridge and others that didn't get a mention. So try and go on a foggy day as well as a sunny day (not impossible in SF).

Where was the Golden Gate Bridge on the 2015 Lonely Planet Ultimate Travelist?

101. It has subsequently risen up the ranks by 41 places.

Does the Golden Gate Bridge deserve its higher place on the 2020 Lonely Planet Top 500?

It's one of the world's most iconic sights, so yes. Does it deserve to be ahead of Niagara Falls and the Pyramids? Not so sure. 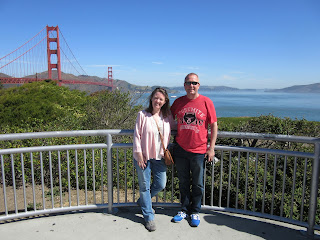