What is Independence National Historic Park?

It's a 55-acre area of Philadelphia that contains a lot of buildings associated with the American Revolution and the USA's founding history. The buildings include Independence Hall, where the Declaration of Independence and the Constitution were debated and signed, and the City Tavern, a replica of the 18th century pub where the Founding Fathers used to meet.
What's Independence National Historic Park like?
It's fantastic. It's small enough to walk round but there's plenty to see. The rangers that run the buildings are so proud and passionate about the history of the area that you come away with a real sense of what took place and how monumentally important it was.
Where is Independence National Historic Park?
Philadelphia, USA

We did a road-trip - we flew in to DC where we visited the Lincoln Memorial (removed from the 2020 edition) and National Mall (287), and then drove to Fell's Point near Baltimore, followed by Atlantic City and then Philadelphia. It was a fantastic trip.

Pete really wanted to go and visit Edgar Allen Poe's house - we didn't make it there on this trip but one day I'll go back.

Place in the 2015 edition of the Lonely Planet Ultimate Travel List?

Does Independence National Historic Park deserve its place in the 2020 top 500?

Definitely. I couldn't understand why it was originally 500th on the list. I still think it deserves to be even higher up. 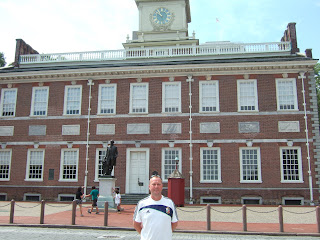