What is the Royal Albert Dock

The Royal Albert Dock is a set of dock buildings and warehouses in Liverpool. It was first opened in 1846 and was the first structure in Britain to built with no wood within its structure. Today it is home to many attractions, including the Merseyside Maritime Museum, the Beatles Story and the Tate Liverpool.

It's a very vibrant and lively place today with lots to see, including the Liver Building and the Beatles statue. But it retains its sense of history.

Where is the Royal Albert Dock?

When did we go to the Royal Albert Dock?

How did we get to the Royal Albert Dock?

I travelled up to Liverpool on the train from London.

The complex was officially opened in 1846 by the man it was named after; Prince Albert, husband of Queen Victoria. It was the first time that a member of the Royal Family had made a state visit to Liverpool. However, for most British people who were around in the 1980s, the Albert Dock will always be synonymous with the ITV show, This Morning, hosted by Richard and Judy. The weather presenter used a floating map in the dock to do the forecast.

What position did the Royal Albert Dock hold in the 2015 edition of the Lonely Planet Ultimate Travel List?

Does the Royal Albert Dock deserve its place in the 2020 edition of the Lonely Planet top 500?

I am quite surprised it was included but it does deserve a place. 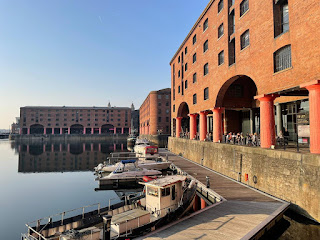