What is St Peter's Basilica?

It's the biggest church in the world. It was built between 1506-1626 on the spot where Peter, one of the apostles, was buried. The original church, built by the Emperor Constantine in the 4th century, had fallen into disrepair and was knocked down to make way for its replacement.

It's huge but it's so full of tourists that it's quite hard to take in the scale.

Where is St Peter's Basilica?

We went on a three day trip from London - Vatican City is in the centre of Rome and very easy to get to. We also saw the the Colosseum (50), the Vatican Museums (173), and the Pantheon (67).

The Pope holds an audience in front of the basilica every Wednesday - it's free but you need to get tickets in advance.

Does St Peter's Basilica deserve its position in the Lonely Planet Top 500?

Yes. I'd have put it higher up. 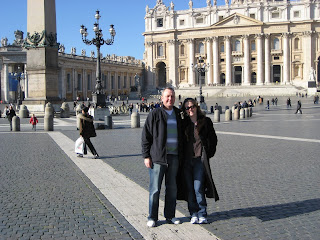