What is the Pantheon?

It's the world's oldest standing building that is still in regular use. The current structure began life as a Roman temple, built by Hadrian in 126AD. He built it on the site of an older temple. It was converted to a church in 609.

It was probably Pete's favourite building in the world. The front is a rectangular portico but the rest of it is round, with a huge gravity-defying dome. It has to be seen to be believed.

Where is the Pantheon?

How did we go?

The word 'pantheon' means 'temple of all the gods'. The artist Raphael was buried in the Pantheon at his own request.

Where was the Pantheon on the Lonely Planet 2015 Ultimate Travelist?

Does the Pantheon deserve to be on the Lonely Planet Top 500?

Pete would say 100% yes and he'd probably put it higher up the list. 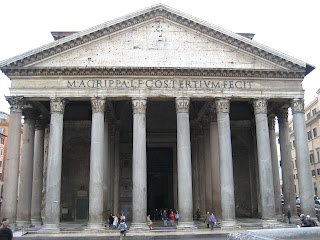